A Brief History of our Church 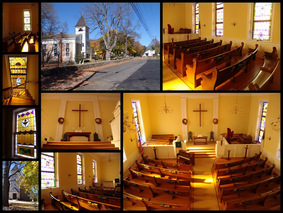 November 18, 1747
We were officially founded and organized as a German Reformed congregation. The sanctuary was a log cabin in the area originally known as Fox Hill.
1760 James Parker gave the land where we are presently located. A shingle sanctuary was built near the site of our current one.
1782 Rev. Casper Wack became our pastor, the first native-born American to enter the ministry of the German Reformed Church in this country.
1813 Leaving the German Reformed Synod of Pennsylvania, we became The Presbyterian Church of Parker’s Village in Fox Hill, part of the New Brunswick Presbytery, and are pastored by Rev. Jacob Caster.
1816 A new sanctuary, made of stone, was built.
1817 An American Revolutionary War soldier, born in 1749, was buried here.
1843 The current church manse (home to the pastor) was built, located one property south of the sanctuary.
1851 Our fourth and present sanctuary was built.
1869 Our name changed to The First Presbyterian Church of Fairmount.
1902 Our sanctuary was closed for remodeling … a portico, bell tower, new gallery, and memorial windows are added.
1909 Our current pews were added.
1921 A Community House was built two buildings south of our sanctuary.
1941 A new (and the current) Community House was built after fire destroyed the first structure on Easter morning of 1940.
1964 We became part of the Newton Presbytery.
1966 An education wing was added to the Community House.
1974 Our longest tenured pastor, Rev. William Davis was installed, serving until July 2002.
1997 250th anniversary celebrations were held and we adopted the more contemporary name of Fairmount Presbyterian Church.
2004 Rev. Rich Gelson arrived. He served as pastor until February 15, 2015.
2008 A two phase project plan to construct the first ever restroom for the sanctuary was approved. The project was completed in March 2011.
2015 Our current Pastor, Rev. Katy Shevel answered our call and began full time duties on September 20, 2015. The first woman to serve as full time pastor in our nearly 275 year history. History continues being made as an Ordination Service was held on October 5, 2015 welcoming Katy into ministry.
________________________________________________________________________________

Learn More about the history of the PC(USA)